Disclaimer: This is not a funny story. In fact, many people find it disturbing. I’m going to put in a content warning here for voyeurism and maybe stalking. Also, if you’re prone to paranoia about cameras, I’d give this post a miss.

Given that Time’s Person of the Year is the silence breakers, I thought I’d tell you about something that happened to me that I haven’t talked about much online. In fact, this post has been kind of loitering in my drafts for about a year. I’m not even sure I’m going to post it, but if you’re reading this, I guess I did.

It’s early September of 2015. It’s just barely starting to get cold outside. My bedroom is on the first floor of a split level ranch, which means that the bedroom windows are even with the ground. When I first moved in there, I was afraid of wild animals like raccoons or skunks coming in the bedroom windows, but I’m over that fear by this point. I’m getting ready for bed, and I decide that since it’s still warm out, I’ll open the window.

I pull on the string, yanking up the accordion blinds. Startled, the man crouching outside my bedroom window leaps to his feet and sprints away. All I remember seeing are white sneakers and jeans. After a paralyzed moment of terror, I sprint upstairs to call for help. The man is long gone by the time we actually go outside with flashlights.

The next night, I go outside with the lights on in my bedroom and press my face against the glass. If you get close enough, you can see a pretty clear view into my bedroom through the tiny holes where the string threads through the blinds. I’d never considered before that someone might get that close to my bedroom window.

I buy privacy film for the windows, as well as blackout curtains. We have motion sensor security lights installed. I never open my bedroom windows at night again, not even in the hottest part of summer.

Six months later. My mother and I are in the kitchen, having popcorn and talking. I realize the cat is still outside and it’s past sunset, so I walk to the back door and flip on the floodlights in the backyard to see if she’s out there. The man standing outside the windows ducks down beside the deck and sprints away. This time I sprint after him—yes, I know this was not a good idea—although only half the yard is lit by the floodlights and I give up when I hear him crashing wildly through the bushes in the dark.

The police come with flashlights and search the whole area. They don’t find anything. They ask me what the guy looked like. I only saw him for a split second, but I think he was white. I think he was wearing a black tank top or short sleeve shirt. He might have had a crew cut. But it was so fast that I honestly couldn’t say anything for sure.

This time, we get our outside door replaced by one with a steel core. We also buy a wildlife camera, the kind that’s motion sensitive and has night vision so you can take pictures of deer eating your tomato plants or whatever. It’s kind of fun, actually, and we take to putting it outside somewhere in the yard, then checking in on it in a few days to see what we got pictures of. Lots of raccoons and mice and squirrels. Occasional opossums. Once a fox.

Another couple months pass. It’s a Sunday night, I remember. I’m just getting home from visiting a friend. It’s 10pm and Game of Thrones has just ended.

As I park in the driveway and approach the side door, I notice that my father has put the stealth cam right outside the door. I remember thinking that I was going to make a face at it, but it’s set up facing the other way, so I don’t.

In the morning, my dad goes out to get the stealthcam, and notices that for some reason it’s facing the other way. He uploads the pictures to his computer and then, worried, calls me in to ask if I had touched it.

The stealthcam has thirteen photos on it. The first two are from when my dad set it up.

The next one, at 10:09pm, shows someone covering the lens with something. Possibly a baseball cap? I only think that because of that round thing to the left of the center, which looks like one of those vent holes in the tops of baseball caps.

Then there’s a number of blurry pictures. Some of them are just impossible to make out, while others feel like they should be obvious, but I still don’t know what they are.

I go into full-on Sherlock mode, and bring the pictures around the front yard, trying to recognize where they might have been taken. One picture is clearly of a hand and has an odd dot pattern in the background. The next picture has some oddly shaped plastic thing. I search the whole area for anything that might match these photos. 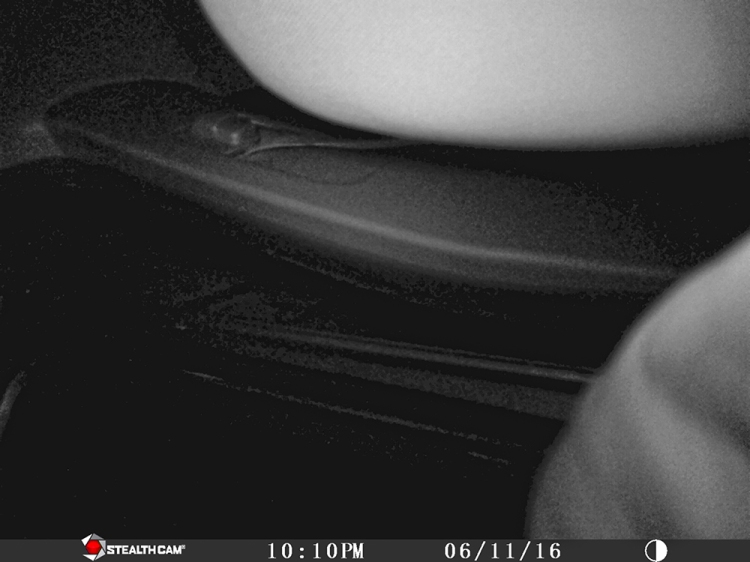 Finally, I found the location of these photos. The trick was to turn that second picture sideways. 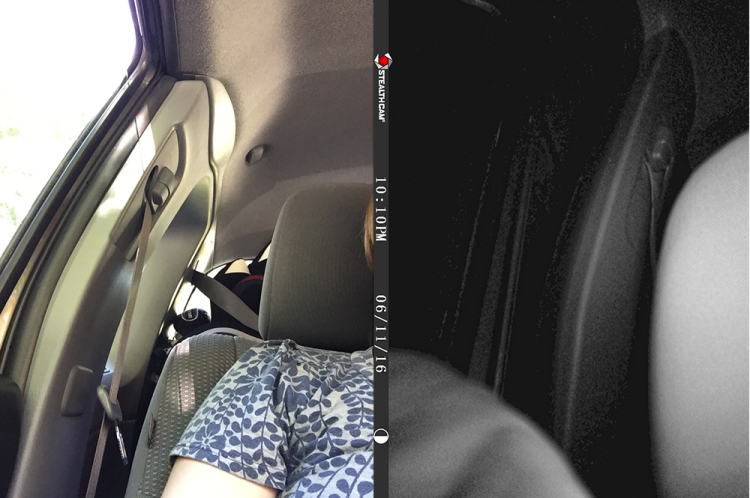 My mother had left her truck unlocked in the driveway. The dot pattern is her dashboard and the buckle is clearly her passenger seat belt. He got into my mom’s car and sat there with the camera to make sure no one saw him outside while he was looking at it. Nothing was missing from my mom’s car when we checked.

There was a ten minute gap between the truck photo and the next one, where the camera was back in position outside the side door. But why did he sit in the truck for ten minutes? You can’t view the pictures on the stealthcam. It just has an SD card that you can take out to upload the pictures to your computer. I think he must have taken the stealthcam because he thought he might have been caught on it, but then why put it back if he couldn’t see the pictures to confirm he was in the clear? He would have just stolen the stealthcam, but he didn’t. Which means he had his own camera with him. He took the SD card out of the stealthcam and stuck it in his own camera, then flipped through them and deleted any ones he thought incriminated him. Then he put it back.

So this man, who has previously been outside my bedroom windows and the kitchen, has been bringing his camera with him. And let’s be real here, folks: those three times we caught him at it weren’t the only three times he came to the house.

Now, thinking back, I remember another time when something odd happened. I used to own a car with a broken driver’s side lock. You could still manually lock it, but it didn’t respond to the electric lock button on the keychain. I was in the habit of locking it manually whenever I got out, then locking the rest of the car with the keychain, but I never locked it in my own driveway, since we lived on a quiet, dead-end street.

One afternoon, my friends came over with their toddler. I let the kid play with my keys, since she loved pressing the button to make the car beep.

Later that evening, long after they had gone home, I was sitting in the downstairs office when suddenly my car alarm started going off. It went off for just a few seconds, then stopped. I grabbed a flashlight and ran outside, but there was no one there.

I realized that the toddler must have left the car locked with the keychain. However, since I didn’t lock the car when I was parked at home, the driver’s side door wouldn’t have been locked. Someone looking in the car window might see that the driver’s side door was unlocked, but if they opened the door, it would set off the alarm because the car still thought it was locked.

Which means there was someone out there trying my car handle. Maybe they had even done it before. Was that why they climbed right into my mom’s car when they had the stealthcam? Had they sat in it before?

For a while I told this as a funny story to people, in the same way I might tell them about locking myself out of the house or getting a flat tire. Sort of a “you wouldn’t believe the day I’ve had” thing. No one’s been hurt and nothing’s been stolen, so it’s fine, right? Except nobody really finds it funny. The other day I told it to someone and it got harder and harder to breathe as I spoke, and for the first time I realized that I didn’t really find it funny either.

When I was a kid, I learned the trick to stripping all power out of nightmares. If I was dreaming about being hunted by a monster, I’d turn around and start hunting the monster instead. As long as I believed it was afraid of me, I wasn’t afraid of it.

This #metoo movement, in a sense, is doing the same thing. People are turning around and taking down the predators that hunted them for years. Which isn’t to say that people haven’t tried in the past—just that the weight of public attention right now is more powerful than the money and reputation of the monsters.

I think about that camera that the guy probably had while he crouched outside my window. Could he have taken pictures of me getting undressed? What about those summer nights when I slept with the window open? It’s terrifying to think of, but on the other hand, he’s not the only one with access to cameras. You can hide a camera in anything these days. And I intend to.

I’m glad that people are coming out and naming the people who have abused them. I can’t do the same because I will probably never know who this person is. I don’t live there anymore. When this guy takes pictures through someone else’s window—and he will, because predators don’t stop until someone stops them—I hope they catch him. I wish them luck.