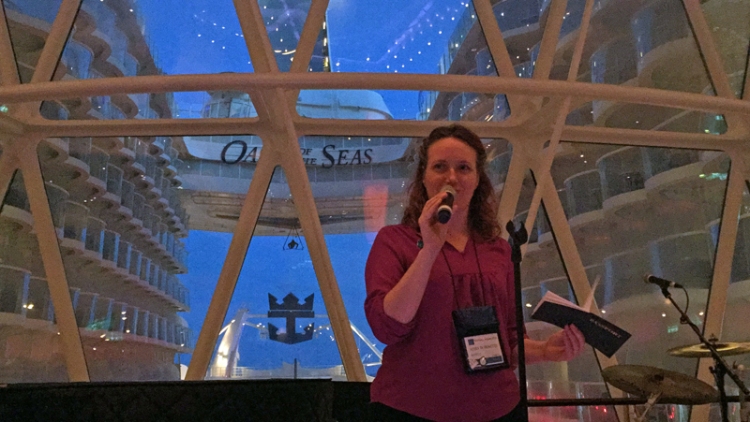 At the end of the Writing Excuses cruise, while we all mingled in Dazzles, drinking bellinis and rum punch and quietly envying the top ten attendees who had each written over ten thousand—and in some cases twenty thousand—words during the week, Mary Robinette Kowal got up on stage to talk to us about what was going to happen after the cruise. Don’t be surprised if you don’t write for quite some time after you leave, she said. The majority of people who leave this retreat don’t put hands to keyboard for weeks or months afterward. Writing is suddenly very hard.

The idea behind that was that now that you’ve been introduced to a whole bunch of new techniques and methods of writing and outlining, you’re paralyzed by trying to keep everything in your head at once. It’s like trying to drive for the first time after driver’s ed: your brain is so flooded with trying to remember to adjust the rear-view mirror and the driver’s seat and release the parking brake and put the car in drive and check both side mirrors and on and on that you sit there for a bit, unsure if you’ve remembered everything you need to remember before you can start to drive.

I didn’t think that was going to apply to me because I’m not exactly new to writing. Although the retreat was really helpful and I highly recommend it, I don’t think I heard anything *new* during any of the panels. Yet it’s been a couple weeks since I got back and I haven’t written a single word since the flight home.

Okay, part of that is because what with my brother’s wedding immediately after the cruise, and then the flood upending my life and forcing me to live out of a suitcase while everything else I own is packed away in trash bags in the garage, I haven’t had a lot of opportunities. But since things have started to settle down, I haven’t been able to write a word. Even the story I started to write on the cruise has come to an abrupt standstill. Nothing feels right to me; every idea seems unoriginal. Every time I try to make myself sit down, my brain rebels against it. In related news, I’ve clocked over 140 hours in Fallout 4, 60 of those in the last couple weeks.

Am I using this convenient explanation as an excuse for my own laziness? Well, probably. I want to write. I just am having a lot of difficulty putting butt in chair (or whatever the equivalent expression is for a standing desk).

Nanowrimo starts in 12 days. This is going to be my fourteenth year doing it, so I can’t not do it. I need to get my act together in the next two weeks. The first step is probably going to be to take the batteries out of my Xbox controller and hide them, but after that, we’ll see.