I’m back from my brother’s wedding and the flood has been more or less taken care of, so I have time to sit down and write a cruise recap. Here goes!

The retreat was on one of Royal Caribbean’s Oasis-class boats, the Oasis of the Seas. This was the largest cruise ship in the world when I booked the cruise, but actually became the second largest in May when they launched their newest ship, the Harmony of the Seas. However, it’s not like Harmony is that much bigger—it’s less than two feet longer and can accommodate an extra 484 passengers (they pack a lot into that extra two feet).

(Side note about the Oasis: it was built in Finland, and when it was completed, it had to sail to the US, which meant it had to sail under the Great Belt Bridge to exit the Baltic Sea. But there was a problem: the bridge had a clearance of only 213 feet, and the Oasis was 236 feet tall. Retracting the funnels on top got them almost exactly to 213 feet, so they had to rely on something called the squat effect, which is when a boat traveling at high speed in shallow water is dragged further down to the low pressure their speed creates. So they had to aim the ship at the bridge and sail at it as fast as they could in the hopes it would get them just under 213 feet. They made it with 2 feet to spare.)

The boat has a bunch of bars and restaurants, five swimming pools, who knows how many hot tubs, an ice skating rink, an aqua theater that had water shows and nighttime movie viewings, a regular theater where you could see the musical Cats, a casino, two rock climbing walls, a basketball court, a carousel, a zip line, a spa, and probably some other stuff that I didn’t even get to see. They had yoga classes on the helipad, which I wish I’d known about in time to attend one. If it weren’t for the floor occasionally not being where you expected it to be and the fact that you couldn’t leave, you wouldn’t even know you were on a ship.

Last year I had an ocean view room, which was on the third floor and had a large porthole overlooking the ocean. I loved being able to lay in bed and watch the ocean zipping by just a little bit below me. This year, though, I sprang for the ocean view balcony, so I could actually sit out and feel the breeze. It was best in the early mornings, just after room service had delivered a pot of coffee, before the neighbors got out on their balconies to smoke and have phone conversations.

I mentioned earlier that the cruise last year had been life changing. I think partly it’s just the awesomeness of being in a week long retreat in close proximity with a bunch of writers, but also the experience of living on an amazingly huge ship, sitting in the Champagne Bar and knowing that there were thousands of feet of ocean just under the boat, and knowing that tomorrow morning you’d wake up in another country. We passed over the Puerto Rico Trench on our way to the Virgin Islands. That’s the deepest point in the Atlantic ocean, more than five miles deep.

There were 197 attendees this year. I don’t know if that included the guest lecturers, but in any case we were a very large group. Guests included Dongwon Song, Claudia Gray, Navah Wolfe, K. Tempest Bradford, Desiree Burch, Steven Barnes, Tananarive Due, and Lynne and Michael Thomas. Each of them had panels dedicated to their specific areas of expertise, but they were also available for one-on-one sessions and office hours, and they showed up as guests in the various podcast recording sessions throughout the week.

I got in the day before the cruise and stayed at the Renaissance Hotel, which was the main hotel of the workshop attendees. The hotel was undergoing renovation and had loud construction going on, and everything was covered in plastic sheeting. It might be a nice hotel when you see it all in one piece, but I couldn’t tell. I went to Shula Burger for lunch, which was…less than impressive in its allergy accommodations. In the afternoon, I met up with some other attendees and we headed out to the Ft. Lauderdale coast for touristy cocktails.

A shuttle from the hotel took us to the cruise port, and by mid-afternoon we were registered for the conference. The first scheduled event was a treasure hunt with coded clues that helped us get to know the ship. It was very clever and an improvement over the scattered tours of last year.

The boat reached the Bahamas just before sunrise. It was still black out, and the ship is amazingly quiet. I could only see a few points of light on shore and hear the screaming of birds. The ship had to spin around and back in to the dock, and before we even got off the boat, three more ships parked next to us.

Nassau was very pretty, although the area immediately around the ship was oppressively touristy, with aggressive vendors who would grab at you and try to get you to buy whatever they were selling, be it souvenir shells or taxi rides. After an hour or so wandering and avoiding eye contact with vendors, we returned to the ship and took advantage of the empty pools.

I love at sea days on the ship. It’s kind of cozy, knowing that there’s no land around you for miles. We had a full day of panels and a podcast recording.

St. Thomas is a lovely little island, only thirty-some-odd square miles. An open-sided bus took us careening up the side of the mountain. Since St. Thomas was once a Dutch colony before America bought it, the cars all drive on the left side of the road, but oddly have steering wheels on the left as well. Is there any other country in the world that does that? That plus the lack of seatbelts or doors made the high-speed bus tour even more terrifying. At the top of the mountain, we stopped at a place that made amazing banana daiquiris, and then headed to the Great House, which had free rum punch, loud parrots, and breadnut trees.

That evening, we had a wedding in the group. Miko and Jessica, two attendees from last year, were the two brides, and Mary Robinette Kowal officiated. I’ll admit, I teared up a little bit. The couple had to officially get married before getting on the boat because maritime law doesn’t yet allow for same sex marriage (seriously, maritime law? Get your shit together). It was a very pretty ceremony. 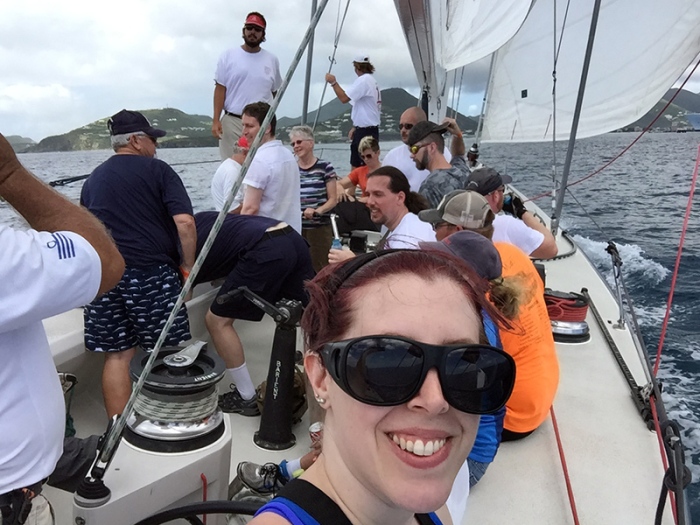 Sint Maarten/Saint Martin is a half-Dutch, half-French island that greeted us with a rainbow just off the starboard side. I’d booked an excursion to compete in a regatta on an America’s Cup yacht. There are two Canadian boats there that do regular racing with tourists: Canada 2 and True North. Since I happened to be video taping the whole thing, the organizer chose me as team captain on one of the boats, so I chose True North, because I liked the name. I chose horses in horse races by the same standard, which turns out not to be the best method of picking a winner.

On the yacht, everyone gets a job in running the boat. I was rear winch, which meant I wound and unwound the starboard side winch whenever we had to tack from one side to the other. Not too long into the race, both boats were becalmed in an unexpected lack of wind. We bobbed along in the water, nearly colliding with the other yacht, until a squall and brought some wind our way, giving us enough wind to illegally run over two markers, refuse to take the penalty, and then quit the race before we had done the final lap. Not the best strategy, I’ll admit, but our captain (the real one) and crew weren’t the best at communicating with each other. It was fun, anyway, even if I ended up with a terrible sunburn. 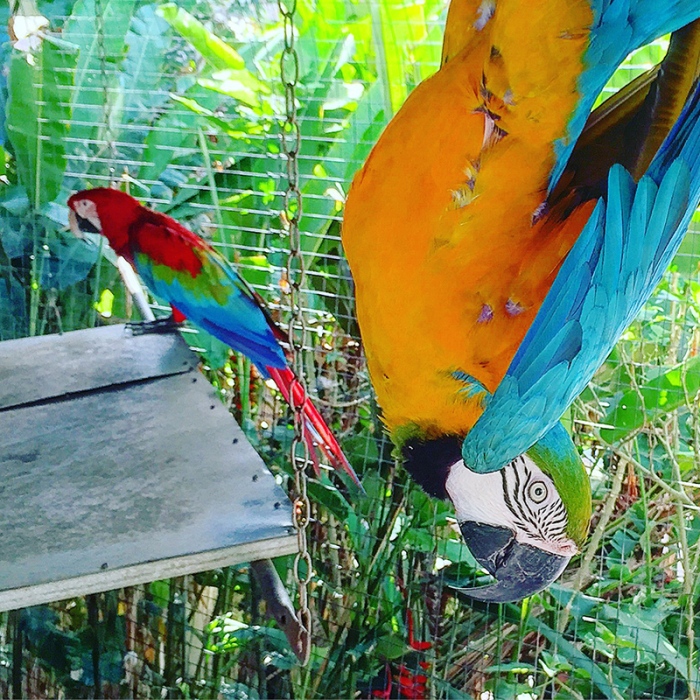 It was another at sea day, but most of the day was devoted to breakout sessions. I had a novel critique group with Mary Robinette Kowal. It was really useful, though unfortunately Mary had to leave because of a family emergency halfway through. (Don’t worry, everyone is fine.)

That evening was a special night. There were two formal nights on the ship, but our group had decided that this one was going to be formal cosplay, with the theme “sci fi and fantasy wedding”, since the wedding reception was that night. I dressed as a formal, badly sunburned Black Widow. Our entire group met at the aqua theater for a group picture, then paraded grandly through the ship before returning to Dazzles, the club, for free booze and wedding cake.

On the final day of the cruise, I decided to get everything done on the ship that I hadn’t gotten around to. This meant climbing the rock wall as soon as it opened, and then taking the zip line. After dinner, I stayed up with a group of maybe fifteen WXers to play a game of werewolf in the hot tub.

We got into dock by 6am, but my stateroom wasn’t given leave to disembark until 10am, so we took a sad tour of all the closed restaurants and bars while the crew frantically got the boat ready for the next cruise. It was sad to leave, even if it was the best thing for my wallet. Seriously, everything on that ship has an 18% gratuity automatically tacked on, even when you’re just buying a coffee at Starbucks.

There were a lot of organizational improvements this year, which is great. I loved the many opportunities we were given to meet each other and learn, but also I loved the flexibility to go take a nap or get some writing done if we wanted. I really don’t have any complaints about the retreat or the cruise itself, apart from an incident with one obnoxious waiter who pointed out me and another women as people with allergies at our table, then repeatedly returned to the table to let everyone know that it was our fault the food was late because the allergy-free food took so much longer. That was just one douchey guy, though, so it didn’t ruin my experience or anything.

I desperately want to go next year but I don’t know if I can afford it. If you haven’t gone but are on the fence about it, I strongly recommend it.  If you’ve never been on a cruise, it’s a fun way to experience one with a big group of friendly people. I’ve never been on a cruise other than with Writing Excuses, and I can’t imagine how regular cruise goers fill their time without a bunch of writing panels to go to.

Here, have one final picture: 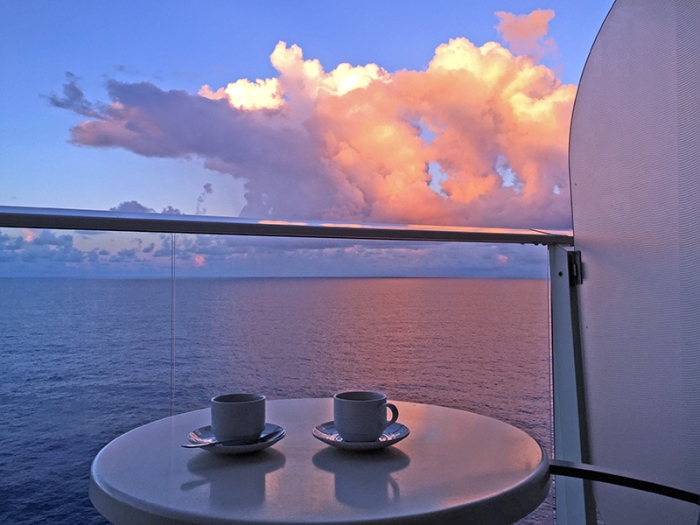 View all posts by Bennett North