Last Wednesday, I flew to Madison, WI, to meet up with Aimee Ogden so the two of us could undertake the 7 hour drive to Kansas City, MO. That meant I had to get up at 2:45 am for a 5:00 flight out of Boston, so I could get to Madison by 9:30 am, and subsequently get to Kansas City by 5:30 pm, when we had dinner plans.

Despite the tight schedule, Aimee agreed to a quick side trip to the World’s Largest Wooden Nickel, which is in Iowa City, IA, and was worth every minute.

The convention was situated in the Kansas City Convention Center and the hotels surrounding it. We were in the Aladdin, which was cute, though not the main hotel, so there was no programming at it. We got to the hotel with just barely enough time to change for dinner and run over to the Marriott to meet our group for dinner. I can’t remember everyone who was there but there was Lynne and Michael Thomas of Uncanny Magazine, along with their daughter; Ann Leckie and her daughter; Julia Rios and their mother; Steven Gould and Lauren Mixon; Ada Brown; Matt Rotundo; Chris Kastensmidt, and a handful of others who were so far down the table that I didn’t interact with them. We went to Gordon Biersch, which was pretty good, although I’m not a beer drinker.

Thursday morning, Aimee and I walked through the oppressive heat to the Blue Bird Bistro, which was a cute little place with really great bison sausages and vegan biscuits. When we got back to the convention center, we tried to sign up for a few kaffeeklatsches, but they’d already filled up.

The Future of Forensics was a fabulous panel about what’s currently possible in forensics and what future problems people may find while investigating crime in space: for instance, trying to do blood spatter analysis in microgravity. It was fascinating and it’s definitely going to be something I do more research on in the future.

Matt Wallace and Mur Lafferty recorded an episode of Ditch Diggers on Thursday night with agents Connor Goldsmith, Sam Morgan, and Jennifer Udden. They staged a tabletop RPG where the agents went through the Enchanted Forest of Publishing, and if they made a wrong move, one of their clients would die. I don’t think any of them finished with all of their clients intact. The panel was taped so I’m sure it’ll show up at some point.

Friday morning was the Codex breakfast. Codex Writers’ Group is a writing workshop for pro-level spec fic authors. I applied to Codex last week but didn’t make it in before getting to the con, but Aimee is a member, so I tagged along to the very crowded breakfast. After getting through the line and then receiving my order, I had about ten minutes to scarf down my eggs and bacon before I had to run to the WorldCon writer’s workshop that I had signed up for. Sunil Patel helpfully kept me from dumping my eggs all over myself, which I appreciate. I don’t think it would have made for a good first impression at my workshop. (Not sure it made for a great first impression with Sunil, but oh well).

The writing workshop was with Evey Brett and Walter Jon Williams and two new writers who, like me, had submitted a short story a few weeks ago for critique. I got a lot of good feedback on my short story, and even learned a bit from the critiques of the other writers’ works, so that was helpful. I got out early enough to catch most of the F&SF magazine group reading.

John Scalzi had a reading that afternoon. He prefaced it with ten seconds of funny faces, since he said he didn’t want to seem intimidating, and then read the opening of his next novel, The Collapsing Empire, and a short story from his upcoming anthology, Miniatures, which was interpreted by an ASL speaker for someone in the audience. The ASL interpretation added an extra level of comedy to the reading.

Also Friday afternoon was the infamous State of Short Fiction panel, which I regret to report I did not attend. I’m led to understand that Dave Truesdale, panel moderator, went off on a bit of a rant, repeatedly derailed the panel, and finally was suspended from the con.

Aimee and I decided it was time to try some of the Kansas City bbq we’d heard so much about, so we walked with Bill Ledbetter to a bbq place six or seven blocks away. It was a great dinner, but when we got out, it was just starting to rain, and by the time we were halfway back to the hotel, it was raining hard and the wind was strong enough to push us backwards.

There was an Asimov’s and Analog party going on in the SFWA suite, but we had to change clothes and dry off before we were presentable enough. The party had some nice looking cakes and pastries. If I weren’t allergic, I would have been all over that.

Saturday morning, after breakfast, I went to Mary Robinette Kowal’s reading. She had decided to have a roving launch party for her new book, Ghost Talkers, which is about code breakers in WWI. Several of her posts about the party had secret codes hidden in them, and if you approached her with the code, she would give you a postcard or some other item with the next code on it. I figured out the code from her post and broke the postcard code pretty quickly, but got stuck on the next one.

As part of her party, she was carrying cookies, rum, and scotch, which she dispensed to the crowd before her reading. This was amusing, and there was no one underage at the reading (as far as I could tell from looking around) but it violated WorldCon rules, and the next day, Mary was suspended from the con. I thought the unexpected rum tasting was entertaining, but I do see how it was a problem from the con’s point of view.

That afternoon, Ann Leckie had her reading of her next book, which is set in the same universe of Ancillary Justice but is not set in the Radch empire and doesn’t deal with any of the same characters. The scene she read was very funny and I look forward to reading the rest when it comes out, whenever that might be.

That night was the Hugo Awards. We watched the simulcast in the dealer’s room rather than going to the awards themselves. I’m sure you’ve already seen the results, so I won’t go over them. Neil Gaiman’s acceptance speech was refreshingly cutting, and Andy Weir (author of The Martian) had not one but two astronauts accept his awards. There was a lot of applause when No Award won Best Related Work. While I’m sad Chuck Tingle didn’t win best short story, Naomi Kritzer’s “Cat Pictures Please” was very deserving. Anyway, if Chuck had won, we wouldn’t get his newest work, “Pounded in the Butt by my Hugo Award Loss.” 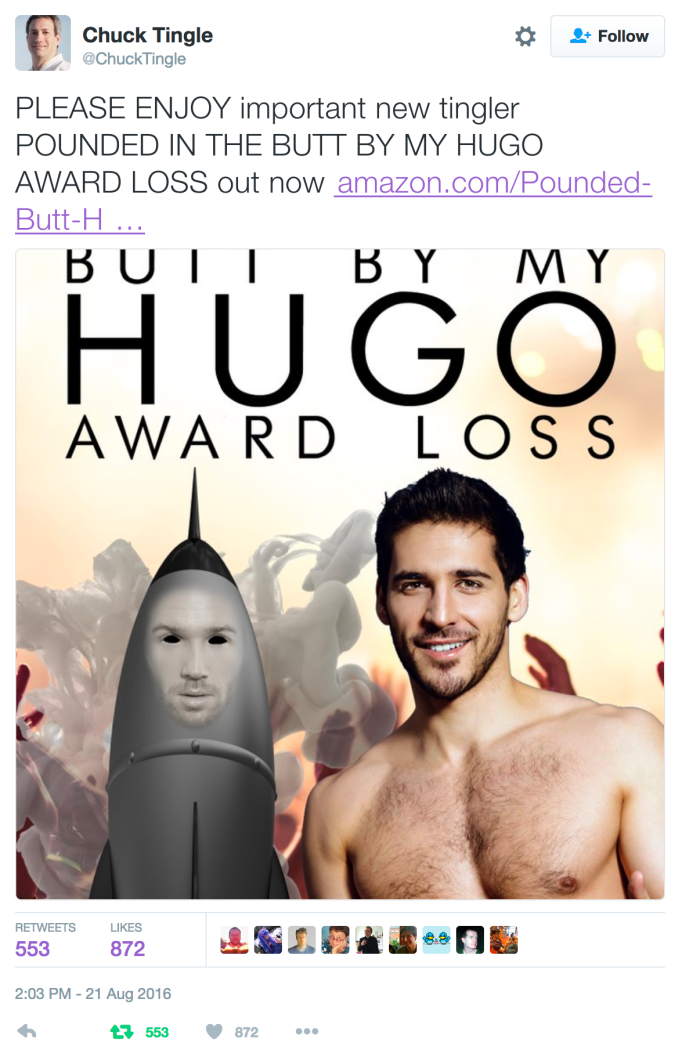 Sunday was when another thing happened. I wouldn’t mention it except Alyssa Wong was harassed by creepy fans at the con, leaving her to cancel all her appearances on Friday, and leading to a lot of talk about how to behave at cons.

Sunday morning, Aimee and I went to the dealer’s room. We got there before it opened, and got in line behind a pair of men who immediately turned to chat with us, despite our polite disinterest. After repeated attempts at awkward conversation, one of the men reached out and grabbed my badge around my neck and pulled it up. I had a moment of confused flailing before he said “I just wanted to see your shirt” and let go of my badge. Luckily the line started moving again, but when we got on the elevators, the man turned to face me for the ride up, again stared at my badge, and said “Ooh, you’re a WorldCon virgin.” Cue uncomfortable laughter and a quick escape at the top of the escalator.

You can say he was just socially awkward, and I’m sure he was. So am I. So are a lot of writers, and a lot of people in general. The thing about it is, I don’t think he would have grabbed John Scalzi’s badge to look at his shirt. Take that as you will.

Now, when I’m at a con like this, I try to be nice to everyone. I want people to see my name and think “Oh hey, Bennett North was pretty cool in person.” This means my default reaction is that I try to be friendly and laugh off the creepiness. I don’t think this is a good way to be, and I’m trying to assert myself more when creepy things like this happen, but I’m still not very good at it. So I didn’t report this event, but in the future, I plan to do so.

View all posts by Bennett North