Earlier this month, Disney expressed their shock at the #WheresRey campaign on Twitter. Wait, people want girls in their toys? What do you mean, people liked the main protagonist of The Force Awakens? Don’t you want to snuggle with a Kylo Ren cuddle buddy pillow instead? Slip between some Kylo Ren sheets? Maybe wear his mask? Dress up like him? Wear a t-shirt with his face on it? Wave his lightsaber around? Isn’t Kylo Ren such a badass? Finn too, I guess. Maybe Poe Dameron as well, although he didn’t play a major part in the movie. But Rey? Don’t you know she has girl parts?

“I’ve spoken with Disney people, and they were completely blindsided by the reaction to the new Star Wars characters,” [Heroic Girls founder John] Marcotte went on to say. “They put a huge investment into marketing and merchandizing the Kylo Ren character. They presumed he would be the big breakout role from the film. They were completely surprised when it was Rey everyone identified with and wanted to see more of. Now they’re stuck with vast amounts of Kylo Ren product that is not moving, and a tidal wave of complaints about a lack of Rey items.”

The [toy industry] insider, who was at those meetings, described how initial versions of many of the products presented to Lucasfilm featured Rey prominently. At first, discussions were positive, but as the meetings wore on, one or more individuals raised concerns about the presence of female characters in the Star Wars products. Eventually, the product vendors were specifically directed to exclude the Rey character from all Star Wars-related merchandise, said the insider.

“We know what sells,” the industry insider was told. “No boy wants to be given a product with a female character on it.”

Meanwhile Hasbro is releasing toys like the Star Wars Monopoly game, which has every character except Rey, and a set of action figures which doesn’t include Rey or Captain Phasma but does include a faceless Stormtrooper and a faceless TIE fighter pilot. Maybe you can pretend there’s a girl under that helmet?

A spokesperson said that Rey wasn’t included in the Monopoly game to avoid movie spoilers, in a game that’s ostensibly about buying up real estate. Meanwhile, “The board also features Luke Skywalker and his iconic father, Darth Vader. The former, has no lines in the new Star Wars, and the latter is not even in the movie.”

Then there was the toy Millennium Falcon, which was released with Finn, Chewbacca, and BB-8, none of whom actually piloted the ship in the movie. Who did pilot it, you ask? Come on. You know the answer already.

It’s not like any of that is new, though. After Guardians of the Galaxy, it was impossible to find a Gamora toy. Ditto with Black Widow after the Avengers movie. You know that iconic scene in Avengers 2 where Black Widow drops out of the cargo hold of a jet in a motorcycle? You can actually buy that toy if you like—as long as you don’t mind Captain America or Iron Man or Ultron riding the motorcycle instead.

The industry insider confirmed that the Black Widow character is widely considered “unusable” within the toy industry. “She has a tight black outfit. Our main customer is concerned with ‘family values,’” said the insider.

Leaving the women out of merchandise is a calculated strategy by toy companies. In the 1970s, toys were largely gender neutral. It wasn’t until Reagan deregulated advertising to children in the early 1980s that companies began to aggressively segregate the toy market by gender. They realized that if they make boy toys and girl toys, then parents would have to buy twice as many toys for their little darlings. This strategy doesn’t just work for children, either; there are feminine and masculine versions of deodorant, razors, shampoo, soap, hand lotion, pens, pepper spray, guns, etc. Not to mention the new fad of “broga” and “brosé” and “bromance” and “guyliner” and whatever else you can put a masculine prefix onto. This way, a husband and wife won’t share the same gendered products, and better yet, companies can charge more for the female version. No, really. It’s called a pink tax.

Of course, people can and do buy outside of the narrow range of things targeted toward their gender, but the staggering majority of consumers don’t. If it wasn’t a lucrative strategy, companies wouldn’t do it. There have been some attempts recently to fight back against this trend, such as Target getting rid of ‘boy’ and ‘girl’ toy sections. Oddly, some people were really upset about this. 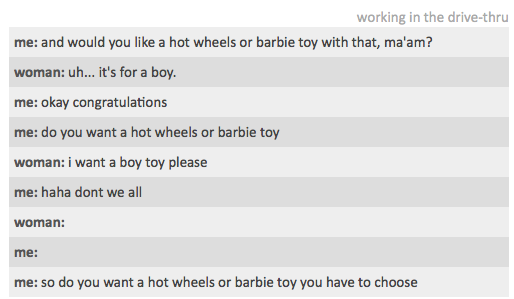 Bethesda just released promotional photos of an extremely lifelike model of the power armor from Fallout 4. The armor is being worn by the default white male vault dweller that the game starts with. Of course, Fallout 4 allows you to heavily edit your character’s appearance and choose between two genders and multiple ethnicities, so this model looks nothing like the vault dweller I know and love. Maybe there were some players who just stuck with the default character, but if I had to guess, I’d bet that those players looked a lot like the default to begin with.

I’m aware that Bethesda wasn’t likely to make a version for every character option available. Even if they did release a female version, odds are astronomical that she would be white. The point is, that model is meant for the target demographic, just as the Star Wars Monopoly board was, and the Millennium Falcon, and the Avengers 2 motorcycle, and all those action figure sets.

[Bioware marketing director David] Silverman says he’s been surprised by the amount of interest that Shepard’s female version has generated, but that it’s something that the team has embraced. “There aren’t enough female heroes in games in general, so it’s something that people can rally around and celebrate,” he says, adding “Jennifer Hale does an absolutely incredible job doing the voice of FemShep, so people really connect with that.”

At the end of their apology, Hasbro said that they’ll re-release the Monopoly game with Rey included, and they’ll make sure to get some more Rey merchandise going. It’s a good start, but it remains to be seen whether the next big action movie to come out will have learned that lesson. How many movies and video games will it take before companies stop being surprised at fans’ interest in the female characters? How long before merchandise involving non-male characters is the default, not the last minute add-on?