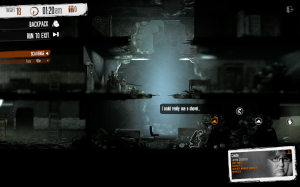 A few days ago my friend Mel recommended I check out This War of Mine, because I don’t spend enough hours a day playing video games already. I’ve played it for 29.6 hours since then, and the only reason I haven’t played it for more is because I was at a Christmas party yesterday.

In This War Of Mine you do not play as an elite soldier, rather a group of civilians trying to survive in a besieged city; struggling with lack of food, medicine and constant danger from snipers and hostile scavengers. The game provides an experience of war seen from an entirely new angle.

I’ve played through it three times, reaching day 42 the first two times and 22 on the third. The game can last anywhere from 30 days and up, but generally 30-40 days. I guess I was just unlucky on my first two tries.

You start the game with one to four survivors (usually three) squatting in a half-destroyed house. You’re living in the city of Pogoren, which is in the middle of a war. Everything has been shelled, and most buildings are ruined. Snipers keep you in during the day, but one survivor can go out and scavenge every night under the cover of darkness. You can scavenge in a number of different places, though some places might be blocked by fighting, and if it’s winter, the snow can keep you from getting into others. You’re not the only scavenger out there, and a lot of the people you meet can be dangerous. Staying home can be dangerous too; if your defenses aren’t good (or even if they are), you can be raided by other desperate survivors.

There are twelve possible survivors–seven men and five women–and you get a random assortment each time. More may show up later, although you never seem to get more than four at a time. The locations available in the game and the dangers in each one are also randomly selected, making each play-through a little different. Sometimes you have a while to get ready before winter starts; sometimes the game starts in a blizzard.

Your survivors all have four stats: happiness, hunger, illness and wounds. Each of those has five levels: for example happiness ranges from content to normal to sad to depressed to broken. Illness can go from normal to slightly wounded to wounded to seriously wounded to lethally wounded. If any of the stats gets too low, the survivor can die, which will seriously bring down the happiness levels of everyone else in the house. 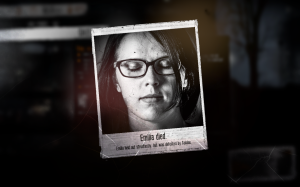 The game was inspired by the Siege of Sarajevo, and is influenced by real events. 11 Bit Studios, the developer of the game, partnered with the charity War Child and their campaign “Real War is Not A Game“, which encourages games to demonstrate the realities of war. It’s a brutal game and really gives you an impression of how incredibly difficult it would be to live in this situation. It’s also very addictive, being just challenging enough to keep me playing again and again. I bought it for $19.99 on Steam and think it was well worth the price. Five out of five stars. 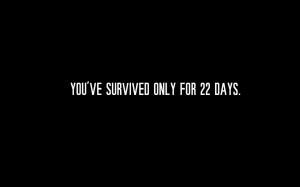